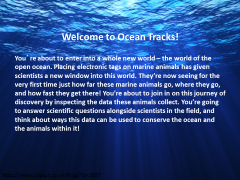 Supporting students' work with authentic data requires a carefully developed and rigorously-tested curriculum to help them understand what the data represent, and to guide them in how to use data analysis tools and visualizations to identify meaningful patterns and develop evidence-based hypotheses.

The Ocean Tracks interface provides students with access to data collected by migrating marine animals, Earth-orbiting satellites, and drifting buoys, as well as a set of student-friendly tools that they can use to take measurements and look for patterns in these complex data sets. Student’s use of the interface is supported by curriculum that guides them through scientific investigations using the data.

Classroom pilots of the Ocean Tracks program in 2013 tested two different models of curriculum supports—one that included more extensive, step-by-step instructions for students to follow that introduced them to the Ocean Tracks interface and how to use them to explore a series of questions (Phase 1a pilot), and a second model that is much shorter, less text dense, and gives students and teachers more freedom to perform independent explorations of the data (Phase 1b pilot).  By testing these two models of curriculum supports, researchers are able to investigate the types and level of supports that are critical to engage students in scientific thinking with authentic data.

An outline of the curriculum modules: 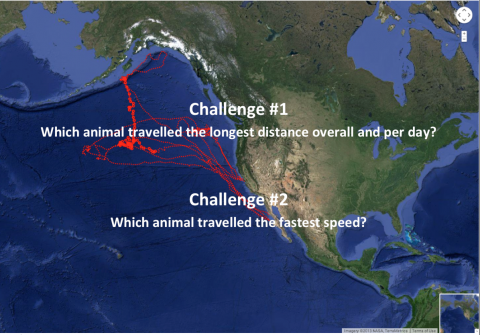 In this introductory module, groups of students become familiar with the Ocean Tracks interface by exploring tracks of their assigned species to find the individual that has traveled the furthest and the fastest. Student groups then come together to compare their results and identify the “champion” species and individual. As a group, the class holds a discussion about the adaptations that enable species to travel long distances in the ocean. 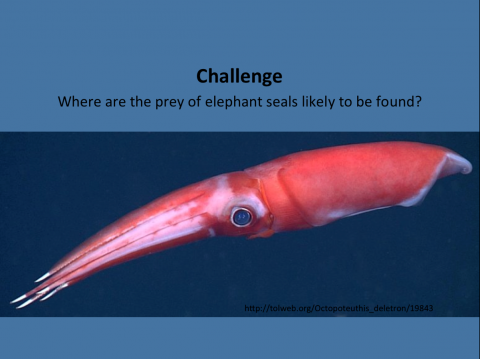 In this module, students generate a map showing the locations of elephant seal prey in the Pacific Ocean. They begin the activity by researching basic ecological concepts using the Ocean Tracks library, and constructing a basic food web for elephant seals. They then inspect and collect measurements of elephant seal tracks (such as average speed and curviness over different portions of the track) to gather evidence for where elephant seals might be feeding. Then, students inspect chlorophyll data, and combine this information with the measurements they took of the tracks to generate a map of where elephant seal prey are likely located. Students finish by discussing the importance of generating such maps, and thinking about additional ways in which they would conduct research to determine the locations of prey species. 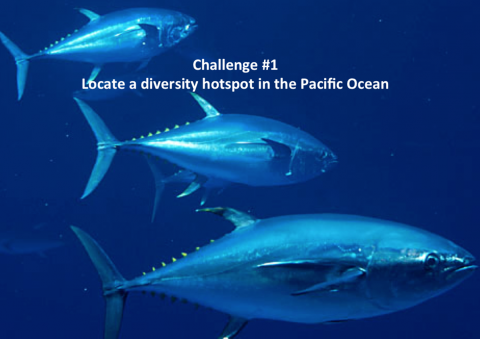 In this module, students are challenged with determining where diversity hotspots are located in the Pacific Ocean and also what species use them. They use the hotspot tool in the Ocean Tracks interface to identify areas with high data density. Students investigate why that particular area is a hotspot and what the animals are doing there using data layers such as sea surface temperature, chlorophyll and currents and researching information in the Ocean Tracks Library. Students work in groups and present their findings to the rest of the class to choose a final common diversity hotspot to then investigate why that location is a hotspot. 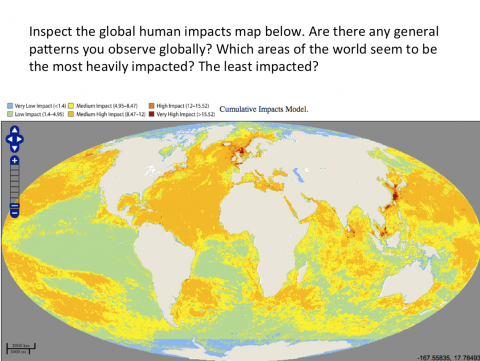 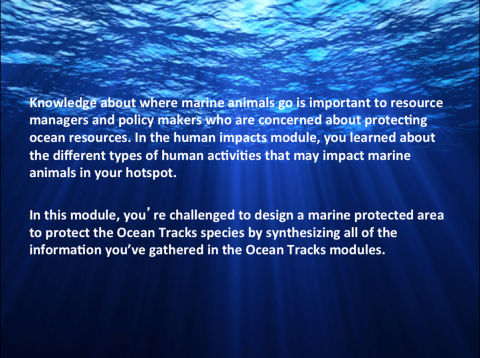 In this culminating module, students synthesize all of the pieces of information they have collected during their time using the Ocean Tracks interface to design a marine protected area. This requires them to think critically about how animals use the ocean habitat, and what characterizes productive areas of ocean at different times of the year. They present their findings to their classmates.